Springtime in Japan is nothing less than magical and that’s why spring is by far the most popular time for tourism in Japan, both domestic and international. In cherry blossom season crowds of people flock to parks, gardens and riversides to eat, drink, and be merry underneath the flowers.

Sakura is the Japanese word for the country’s iconic cherry blossom, which blooms across Japan between March and May each year.

The cherry blossom runs the entire length of the country every year, starting from Okinawa in the far south in February and continues its way along the northern Japan to Hokkaido in May. Tokyo usually sees its first blossoms in the last days of March, with full bloom falling around April 5. Kyoto follows a day or two later, while the mountainous areas around Takayama and Matsumoto bloom about two weeks later, beginning in mid-April.

In ancient Japan, cherry blossom had great importance because it announced the rice-planting season and was used to divine the year’s harvest. Its fleeting beauty, moreover, was celebrated as a metaphor for life itself – and it was praised in numerous poems of the era. Nowadays the blooms still symbolise new beginnings and fresh starts. Schools and companies begin their new year in spring, around the time when the blossoms are in full bloom.

Sakura is seen as an important part of the Japanese identity.

Such was its significance that the Japanese believed the sakura trees contained spirits, and made offerings to them with rice wine. This grew into the tradition of the Hanami party, a celebration of feasting, drinking and making merry that has survived relatively unchanged since about the eighth century. 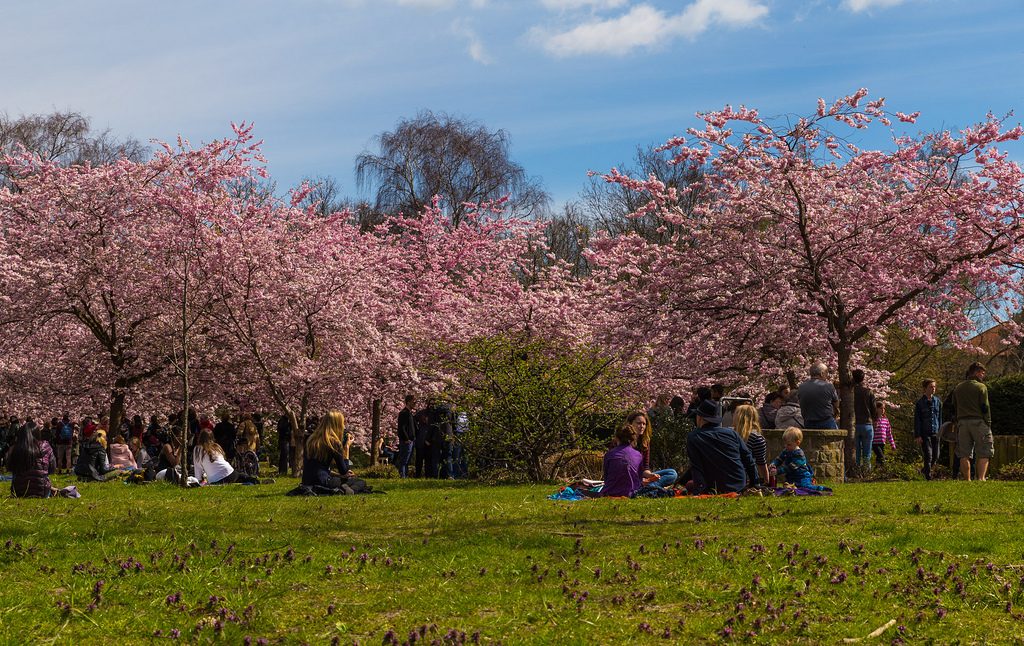 So if you are lucky enough to be in Japan during cherry blossom season, you can’t miss the Hanami (literally “flower-viewing”): people heading out into the local parks and gardens, bringing a selection of picnic food and drink having a picnic meal under cherry blossom trees.

It is during this period that the Japanese are at their most relaxed, and all public places take on a party-like atmosphere. Friends and family get together in city parks for parties that last well into the night under the pale pink blossom.

Take note for your next trip! 😉

This site uses Akismet to reduce spam. Learn how your comment data is processed.

I went vegan few years ago and it was one of the best decision I’ve ever made!

100% natural, cruelty-free, vegan and made in the USA!

GET HERE YOUR DISCOUNT!

get your cruelty-free and vegan beauty box!

WHERE TO EAT VEGAN IN FUERTEVENTURA, CANARY ISLANDS

Whoops, you're not connected to Mailchimp. You need to enter a valid Mailchimp API key.

Any cookies that may not be particularly necessary for the website to function and is used specifically to collect user personal data via analytics, ads, other embedded contents are termed as non-necessary cookies. It is mandatory to procure user consent prior to running these cookies on your website.